Greg Relaford has been a vital member of our Service Technician Team since day one. Born and raised throughout the state of Missouri, Greg and his wife, Kathryn decided to make their journey to the great PNW in 1991.

Having begun working full-time at 17, Greg worked in foundry, coal mining, and manufacturing until his early 30’s. Finally going back to school, mainly to study math and science, he developed a hobby working with computers.  After graduating from Evergreen State College with a Bachelor of Science, he immediately begun working as the primary IT support at Seattle Academy of Arts and Sciences (SAAS.) Over the next 21 years, Greg designed, built, and managed a complex and growing network spanning several buildings and city blocks.

Greg met the love of his life, Kathryn, through mutual friends living over on the east coast before they decided to settle down in Washington State. Greg’s wife grew up in Bellevue, WA, back when it was still considered a small town. Kathryn currently works for herself as a Consultant through Audience Research. Her business is called Kathryn Owen Consulting.

For the last 6 years, Greg has been increasingly involved in the pottery and ceramic arts community; for the last 4 years working at SAAS Greg helped teach ceramic classes, as well as managing the IT department. He continues to teach the pottery wheel at a studio on Bainbridge Island, WA.

Working with Computers has always been a hobby of Greg’s and he is happy to continue this passion in his career. 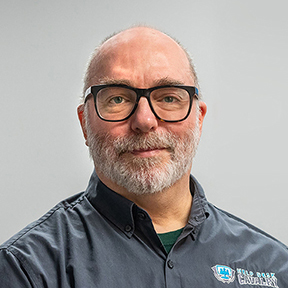